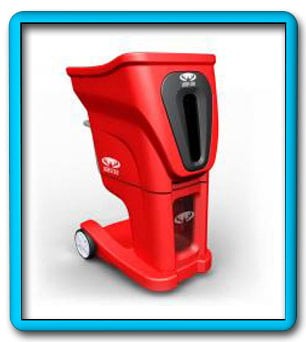 The Phenom is also equipped with six pre-programmed six shot drills that simulate the most popular styles of play - grinder, all courter, power baseliner, moonballer, slicer, and lefty. These incredible drills mix up speed, spin, feed rate, and trajectory preparing you to dominate your competitors. The Phenom offers unrivaled full random oscillation. This revolutionary design allows the machine to throw balls throughout the entire spectrum of the court mixing up speed, spin, trajectory, oscillation, and feed rate. This fully random technological advancement allows for the Phenom to realistically simulate true match play, a feature that is unsurpassed by any machine in its class.

The Phenom is also equipped with three pre-programmed six shot drills that simulate the most popular styles of play - grinder, all courter, and power baseliner. These incredible drills mix up speed, spin, feed rate, and trajectory preparing you to dominate your competitors.

Moonballers can be a nightmare to play against. Think of it like slow pitch softball. The high arcing pitch looks like it should be easy to hit, but it's not! To play the moonballer, you need patience or a combination of patience and a good midcourt swinging volley to move forwards and finish the points. Try practicing both!
Also, don't be afraid to move back and let the high bouncing ball drop to a more comfortable height.

Some of the most effective club level players are called "hackers" by their friends. Others call them "slicers and dicers!" Typically these players can slice or chop their groundstrokes, keeping the ball low and hard to return. To play a "slicer" remember to bend your knees a little lower than normal, minimize unforced errors, and be ready for a long match! These players are usually very steady and will move you all around the court.

Most players are right-handed, which can make playing a lefty a relatively uncomfortable experience. Just don't be the player who doesn't even realize they just played a lefty until the match is over! It's important to know that most left-handers have strong forehands groundstrokes and strong backhand volleys. But, they often have weaker slice backhand groundstrokes and have trouble with low forehand volleys. The feeds from the machine in this sequence are designed to simulate what a lefty might throw at you!

The Grinder tries to wear down his opponents physically and mentally, waiting for the other player to make a crucial mistake. This player hits high, loopy, moderate spin shots that will challenge all players.

A six ball drill that utilizes the back court with different types of spin.

The Power Baseliner is a player who is explosive in their shot selection, playing with pace and aggression and minimal spin. This player exhibits an attacking style, known as "first strike" tennis.

A six ball drill that utilizes full back court with little spin and more ball speed.

The All-Courter is a player type that focuses their game on tactical savvy. He/she can compete well from the baseline and will come to the net to finish points. When playing this type of player, expect a great deal of shot variety.

A six ball drill that utilizes both full back court and front court with some top spin and less ball speed.


In addition, the Phenom is also equipped with the most extensive 2-Line function found today. With its three versatile positional settings; Narrow, Medium, and Wide, you can groove your forehand and backhand ground strokes or use it as a great way to warm up your shots. Furthermore, this dynamic machine combines 2-Line function with random depth and feed rate adjustment, a feature not found on other machines.

The Phenom comes standard with the revolutionary Lexan touch-button control panel with digital LCD screen which allows you to view all menu selections and settings. For operation while "on the fly" the Phenom has an optional 20-function wireless remote control available. The state-of-the-art compact controller allows you to adjust most every function of the machine with just a push of a button. Enjoy instantaneous changes in functionality like; play/pause, oscillation, sweep, fully random, 2-line, speed, feed, spin, and much more.

The Phenom is also equipped with the most revolutionary control panel and optional wireless remote control found today. The "Lexan" control panel utilizes "touch-buttons" instead of dials, knobs, and switches. It also has a digital LCD screen which allows you to view all menu selections and settings. For those players who consider themselves "technologically challenged", do not fear. The Phenom was developed to be incredibly user friendly and can be operated by even the youngest of players.

Scrivi una recensione
Tennis ball accessories are available for each model of Tennis Ball Machine depending on the model.